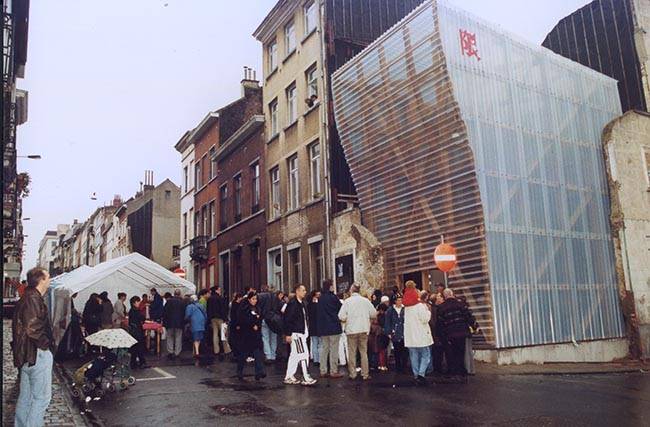 The 9-meter high transparent tower closed off an illegal dumping site , it made the space useable as a meeting place, and it became the figurehead of the process Limite Limite. The construction was designed by architect Chris Rossaert, and built by apprentices of the local rehabilitation programme for former detainees led by Jacques Lechat. The tower replaced the prostitution red lights as the image of the neighbourhood, and was published in architecture magazines throughout Europe.

Construction started in February 1999, after a lengthy process of mobilising workers, raising funds, and building the local support network of residents, schools, shopkeepers, (occasional) passers-by and different authorities. In national newspapers, architect Chris Rossaert later declare: “A simple bench or park would still be use as a rubbish tip. Even if we would have closed it off with a wall, waste could still be thrown over. By aiming for something closed off yet not entirely, we ended up with a light house of which one façade protruded into the street, and which was covered in a synthetic material, so that it remains transparent.” The eye-catching intervention had the explicit ambition of attracting outside attention to the neighbourhood.

The core of the tower consisted of a lightweight wooden construction by architect-engineer Kathleen Mertens. Slimane, one of the workers told a journalist “The hardest thing was the precision this required. We are not ‘pros’. At first that was a challenge, but we did it.” A transparent corrugated heavy-duty plastic was used for the front, and a translucent for the side, both provided by company called Ondex. Because of its transparency, and the fact that internal light was linked to the street light, exhibitions in the tower could also be seen after hours. In addition to support from the Flemish government, the project enjoyed support from the Fondation Roi Baudouin and from the locally based JP Morgan Guarantee trust. It was Frank Pottie, public affairs director this bank who kindly accepted to chair the organisation Limite Limite. 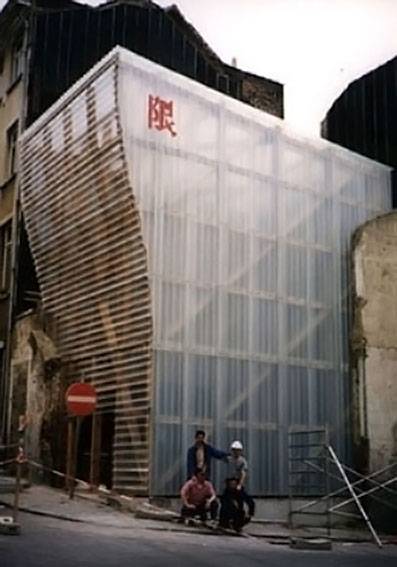 In October 1999 the Tower was inaugurated with a grand street party. From then on, its internal space hosted concerts, theatre plays and exhibitions, but also neighbourhood meetings, cooking activities, and architecture workshops.

Five years after its inauguration the construction was dismantled. The material was placed into a shipping container and shipped off to Belfast. There, with the help from the British Council, a local/transnational coalition was built with local training Belfast Institute, the local council, Ulster University and local arts collective Catalyst Arts. An all-women builders team from Brussels together with a local team of apprentices started building a new pavilion in Belfast’s Botanic Gardens. The visual concept was the Limite Limite Tower collapsed on its side. Lawrence Street workshops finished the building in January 2005. For almost a year the pavilion hosted concerts – classical, folk, indy – visual arts, debates, film screenings and more architecture workshops. 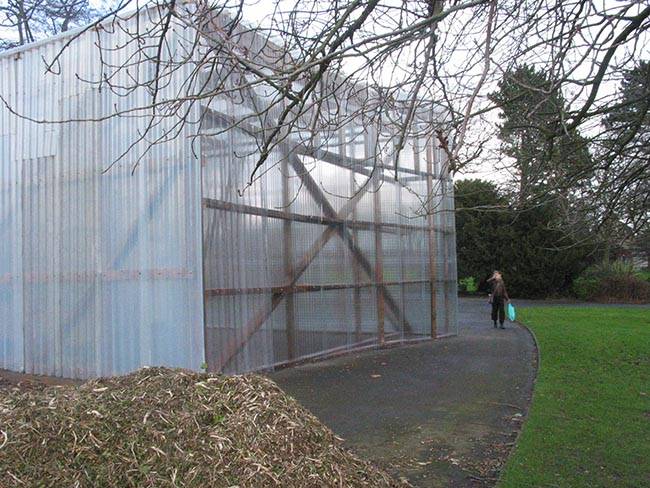 With money from the district contracts that Limite Limite helped attract to the neighbourhood, a small housing block was built on the emptied site. Yet, the lasting impact of the tower was rather the process Limite Limite it boosted, and the organisation it gave rise to.