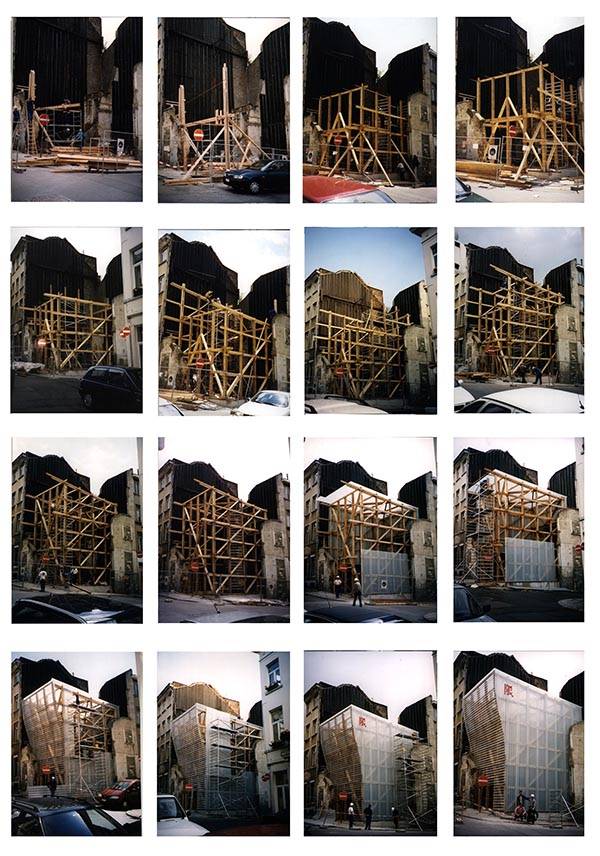 Limite Limite was not started as a bottom-up local development scheme. Yet, that is what it received acclaim for form local communities, academia and international press, and for which it received the Flemish government’s award for innovative urban renewal.

In 1998, residents of the Quartier Brabant in the North of Brussels were fed up with the use as waste dumps of derelict plots of land in their streets. It asked City Mine(d) to intervene. At the time, the organisation had a reputation for transforming ill-used spaces into small parks (Schaarbeek 1997) or sports grounds (Kureghem 1998), always with local residents, preferably in guerrilla style.

A proposed site in the rue Dupont in Schaarbeek was the physical scar of a cynical 1970s urbanistic ploy: local authorities led by mayor Roger Nols (look him up!) bought corner houses throughout the neighbourhood to then tear them down. Once rain and weather had eaten into the neighbouring houses (and their real estate value), the commune would buy up the entire block and develop it as offices as part of the business district Manhattan-North. As a bonus in the same sweep the residing population of mainly foreign origin would also be removed. That was the plan. It underestimated, however, the precarious living conditions people are able to keep up with. In 1998, there were still many houses without running water (at least not from taps) or heating, some even missing windows. Many ground floors were used for window prostitution. And with no improvement in sight.

Local development had arrived at a stalemate. And the site was hardly 40m2 large. So rather than lay out a green space to discourage fly-tipping, City Mine(d) started a more ambitious plan. By means of an architectural intervention on the site, it wanted to create a new image for the red-light district, while the actual construction effort could build a network of local actors. Over time this network could address the very stalemate.

The exceptionally (and deliberately, as it progressed at the speed of the slowest actor whomever that was) long construction process was accompanied by street parties, a neighbourhood newspaper in 4 languages and various activities with local residents. In addition to local residents, local (high) schools, civil society organisations, shopkeepers and larger industry became involved, after a while even the commune and local police joined.

The intervention itself hosted various arts activities, like a theatre play and several architecture workshops. Its anticipated life expectancy of six months was stretched to almost five years. To prevent the arts intervention becoming part of the stalemate, City Mine(d) claimed the tower back and shipped it to Belfast. There, City Mine(d) use it again to bring other disparate communities together.

At the inauguration of the tower, City Mine(d) started working on an organisation that could become the lasting legacy of the intervention. The organisation Limite Limite, with the legal stature of a Belgian non-profit, was the only body that brought together all those who held a stake in the development of the neighbourhood. It existed for another 8 years.

The jury granting the Flemish Government’s Urban renewal Award 2002 wrote: “The ‘rhizomatic’ planning of the project Limite Limite is an interesting complement to the classical approach of urban and regional planning. Limite Limite has put the Brabant neighbourhood back on the political agenda. The commune of Schaarbeek granted the neighbourhood two district contracts and the commune of Saint Josse ten Node another one.”