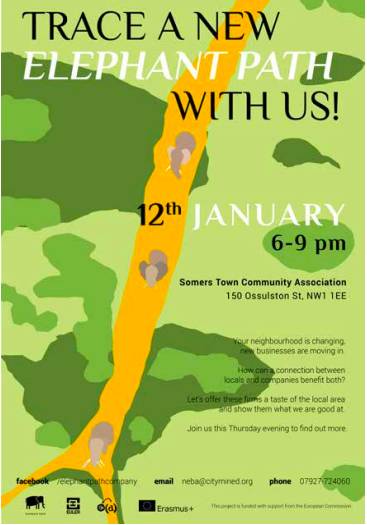 In spatial planning, an Elephant Path refers to the path people carve out when taking the shortest connection between origin and destination. Mainly in lawns, but also through bushes and other obstacles, these paths are a well-known user answer to planners’ original intent. In 2016, City Mine(d), stared tracing an Elephant Path between the local population of Kings Cross/Somers Town in North London, and the global companies like Google, Eurostar, Ted Baker, Gazprom, who were moving into the area. Not a physical path, because these have undoubtedly been provided for in the master plan, but a conceptual link.

To be useful, the path needs to be used regularly, and in order to do that, it has to benefit both residents and workers of the area. So, no charitable donations from one to the other, or extravagant demands the other way around, but a service that would interest both. That is when we came across the concierge service. We learned that it could reduce stress at work, by taking personal tasks of the hands of workers and thereby increasing their most valued asset of all: time. We also understood that quite a few local people were very talented and eager to work, but were held back by the lack of a platform that could promote their talents, a worry about losing benefits when engaging in employment, or just a lack of self-confidence stopping them from committing to permanent and regular work.

We set ourselves the Challenge of creating a portfolio of 15 locals and their skills. The Portfolio works as a networking tool, as well as a way to showcase talents to potential customers. The Challenge gave us a group of 9 people quite confident in their abilities

Aiming to set up a company proved to be an interesting way of identifying and recognising skills. Where other job-related programmes focus solely on defining an individual’s skills, we chose to set up a programme that applied skills immediately in a real world situation and gain experience from that. The validation of skills does not come from a diploma or certificate, but from experience of using the skills. Successful use of the skills obviously also increases self-confidence of the worker and helps them on a path towards more self-reliance

In a unique way, it recognises the history and autonomy of the participant, and inspires them for a community project rather than for a first step on a personal career path. True impact will need to be measured in the coming years, but the programme already reached individuals who turned their back on other training programmes.

The experimental enterprise Elephant Path is still in its infancy. Business plans have been drawn up, and many stakeholders spoken to. As a result of this, quite a few choices have been made, yet implementing them requires time. Elephant Path is a social enterprise, owned by its workers. As such, it develops and tests a more equitable model for casual working, ICT-based work, or crowd employment. Where current models are focussed on large capital investment, and use Return On Investment as the key benchmark of success, Elephant Path measures results first and foremost in terms of individual and local well-being. Well-being for individuals from the area; also local well-being that stems from increased investment and employment in the area. In the debate about more equitable models of gig-economy enterprises, Elephant Path wants to test and improve its model “on the job”.

By developing a working and replicable model, it empowers workers while providing an alternative to aspiring entrepreneurs. The working model or prototype is a way of backing small enterprises, but equally of driving innovation in a part of the new economy that tends to come second to technological innovation, namely social innovation. Elephant Path is an explicitly locally anchored company, owned by workers who are from the local area. Not only does working together improve local community cohesion, but by paying for work large companies invest in the local area, hence contributing to new forms of community-led regeneration.